The Hours by Michael Cunningham

The Hours is a complex yet succinct look into the lives of three women: Virginia Woolf as she writes Mrs. Dalloway, Clarissa Vaughan as she plans a party for her best friend, Richard, and Laura Brown as she plans a birthday party for her husband. These three women's stories are distinctive and seemingly unrelated, but as the book ends, you are swept into the many parallels and connections of these women's lives.

Without spoiling the ending, I will remark that some of these parallels include lesbianism, suicide, party plannning and Woolf's Mrs. Dalloway. It's an eclectic mix, but if you're familar with Woolf's literature, you will probably connect the dots pretty quickly. Admittedly, I have not read any of Woolf's books, but a quick study of her on Wikipedia was enough for me to fully appreciate what Michael Cunningham was trying to tell in his Pulitzer prize winning story.

The Hours is an interesting women's tale with characters you can empathize with. I feel fortunate to have seen the movie before reading the book, so the talents of Meryl Streep, Julianne Moore, Nicole Kidman and Ed Harris filled my head as I read Cunningham's words. I highly recommend either one, or even better, both the book and movie for an introspective look into the lives of three thought-provoking women. (

Here's my list of books read and ones I'd already identified as "planned reads" for other challenges. Later in the year I'll set a personal goal for 2008.

Reflections: This beautifully-written collection of short stories portrays various “maladies” of the human condition, such as loss, loneliness, and isolation. As the title suggests, Lahiri interprets these maladies for her readers. And she is absolutely brilliant. The emotions raised by each story are so profound, and so deep, that you can't help but feel them at the core of your own being. As with any collection, a few stories stood out:
After each of these stories, I had to set this book aside and allow the feelings to wash over and through me. Despite this, it was difficult to put down and even more difficult to let go of when finished. A wonderful book, and very deserving of the Pulitzer Prize. ( 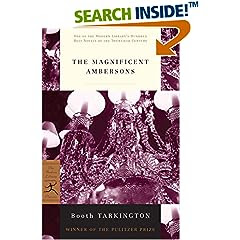 The only other book I've read by Booth Tarkington was Penrod, a story about a mischievous boy growing up around the turn of the century. I remember it as funny and profound upon the subject of boyhood, kind of like Tom Sawyer.

The Magnificent Ambersons, aside from the time period, the early 1900's, and the setting, the American Midwest, is not at all like Penrod. As an under current in the book, Tarkington preaches about the general nastiness and inevitability of urban sprawl and how the automobile and the factory have destroyed community and cleanliness and all that makes life worthwhile. Preaching aside, Mr. Tarkington still manages to tell an engaging story, a sort of family epic, the rise and fall of the Ambersons.

Georgie Amberson Minafer is a spoiled rich brat, reared in luxury and with a sense of entitlement. The Ambersons, George's mother's family, are the center of society in their "Midland town." From the beginning of the novel, the author sets Georgie up for disaster; the entire town is waiting for George Amberson Minafer to get his "come-upance". As George grows up the reckoning is delayed again and again, but the most casual reader must know that George's pride goeth before a fall. George's favorite word for other people, all others who aren't Ambersons, is "riff-raff". His attitude can only and always be described as condescending, even with the young lady with whom he falls in love.

So, The Magnificent Ambersons is first of all a cautionary tale. Pride is destructive. Things change; no one stays on top forever. Fortunes come and go. Only those who are strong, wise, and flexible, and maybe even lucky, can persevere to enjoy the good life.

However, the book is not just a preachy, moralistic fable. It's a picture of life at the turn of the century, of how change affects different personalities. It's a love story about a mother who idolizes her son, and a young man who loves his family pride more than he cares for the woman who is willing to overlook many of his faults and who could have made him happy. And the ending is about forgiveness and hope and the possibility that broken things can be, if not mended, perhaps made new.

I've not seen the Orson Welles movie based on this book, but I plan to do so. After reading the novel, I can see how this books would make a great "old movie". No modern remakes, however, nowadays a writer and director would most likely ruin the movie version with gratuitous sex and a plot in which only the characters' names were borrowed from the original book.

The Known World by Edward P. Jones has not only won the Pulitzer Prize for Fiction, but also the NBCC Award and the International IMPAC Dublin Literary Award.

Jones really knows how to write his characters. Each one was very clearly defined. I won't give away too much of the story here but will write a brief overview.

Henry and Caldonia Townsend are slave owners who are black themselves. Henry's father had freed himself and his wife, and then later Henry. While Henry was still a slave under William Robbins, he became somewhat of a favorite, and was later instructed by Robbins on how to be a proper slave owner. Henry builds up quite a plantation but then dies unexpectedly. How Caldonia, along with her overseer Moses, runs the plantation afterward forms the rest of the novel.

Several issues are presented in the book. Whites' attitudes towards blacks, both slave and free; the function of "the law;" men's attitudes towards women (and vice versa); and the question of how and why blacks could own slaves themselves.

This is a very well-written book, and I struggled on whether to rate it a 4 or 4.5. There is some content in the book that downgrades it slightly for me. Consider it a very high 4.

The Hours and Mrs. Dalloway

It has taken me about two years to read these Pulitzers:

My goal is to complete the list by the end of 2008. It is my first reading project, and although there were some slow reads in this list, the majority are very good. It especially heartens me to pick up an older, obscure book that is long forgotten in the literary world. I scoff at the NY Times Best Seller List!
Posted by Andrea at 10/04/2007 12:08:00 PM 3 comments: